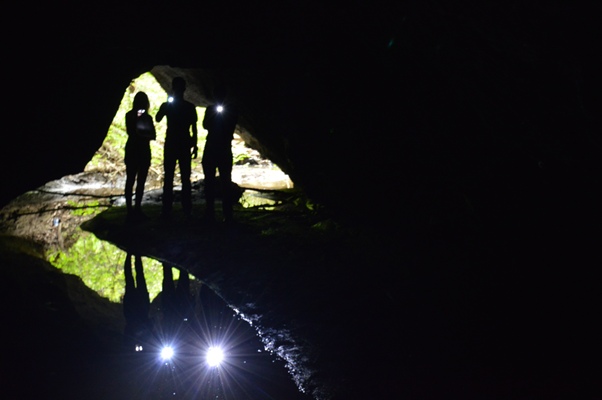 The small tunnels, the aqueducts and the Etruscan Tunnels of Formello

The underground tunnels, aqueducts and large Etruscan tunnels are among the secret places to be discovered within walking distance of Rome.

The Etruscans were worthy plumbers and we begin to discover them in a tunnel in a side valley of the Torraccia stream, a tributary of the river Cremera, which is a steep and deep gully dug out near the mill of Formello.

In any case, where there is now an accumulation of small impassable gorges, once there was a mule track, which connected Cesano to the mill of Formello, you get to a fountain. This was totally surrounded by nature, far from any path and away from the most famous areas of the Vejo park, located along this ancient path.

The fountain is made of large blocks of gray tuff, about a dozen meters long and about one wide, and is located at the base of a wall above which opens the feeding tunnel, whose entrance, due to landslides, now has the appearance of a cave.

It is possible to enter the cave area, even if it is difficult to get to the bottom due to the amount of water and mud and the need for a helmet and powerful flashlights. However, even the few meters that you can get inside are exciting.

Seeing in fact that the aqueduct is still active, with the path as it is from the stream that feeds, after all these centuries, the fountain below.

But the most famous gallery is perhaps the one excavated by the Etruscans to let the water of the Cremera flow during the floods, so that it did not back up and flood the Vejo flats.

Like all the Etruscan galleries, even this is not reachable by paths, and the visit is advisable only in summer and at shallow water. The place is absolutely magical immersed in the gorge of the Cremera from the luxuriant nature, the reflections of the water at the edges of the gallery (provided there is sun), the walking a little scared - with galoshes - into the gallery.

Continuing to move away from Rome in the direction of Formello we arrive at the aqueduct of the Fosso degli Olmetti which was part of a hydraulic system to reclaim the area of ​​Vejo and which has been in operation for over 2500 years.

The system consisted of a series of 'free flowing almost touching' channels that had been dug into the tufa rock. From time to time these channels flowed into a 'settling basin' that rebalanced the different pressures and levels and it seems that this basin was built by the Etruscans with an ancient artificial dam.

Let's go back to the gallery of the Fosso degli Olmetti: my desire is to invite you to experience the thrill of entering the first few meters (using a service gallery) that are of a unique splendour.

The looming walls, the flowing water running under our feet, the fear of slipping, getting soaked and spraining an ankle, the roar of the last waterfall: everything gives unique and arcane sensations, and a certain fear.

With helmets and torches a visit can be extended for a few hundred metres, increasing the charm of this excursion.

Near Fosso degli Olmetti there are three tunnels dug to control the waters of the area, similar to construction techniques at Ponte Sodo, and equally astonishing, isolated from the rest of the world as if they were tropical ruins.

The third gallery, with an internal waterfall, is incidentally usable if you have at least a ladder for speleological use.

These are distant and mysterious places. A unique blend of nature and traces of human work in a wild and alienating environment just a few kilometers from the GRA.

Entering these ducts with your feet in water and mud, seeing the play of light, particularly that coming from above the service wells that open up like skylights, is total immersion, physical and mental, in a mysterious world.

One of these galleries, when I entered the first time, reminded me so much of the magical lava caves of Etna.

We continue the exploration that brings us closer and closer to Formello, precisely into the Selviata area. Good. The tunnels in this area are even more extraordinary.

In one of these, after having passed a pond with the help of a ladder, you can even reach a spectacular point of intersection with more tunnels, which probably had the task of draining the waters of the overlying plains.

Another gallery then, which surpasses if possible all others for grandeur, deserves a specific description. Here it is: after having steeply descended from the street level and having penetrated it, you come to a branch to the right, which after a few tens of meters widens, with the light penetrating it from above by a gigantic hole. This hole was probably a service well, widened with the collapse of the roof.

Then you fall into darkness. And at this point the artificial plumbing of the Etruscans becomes natural. A real cave, which must in fact be entered with speleological equipment.

As for the previous galleries, the work of erosion by water over these 2,500 years has been superimposed on the excavation of the Etruscans.

But in this gallery erosion has exaggerated the grandeur: by widening the old drainage tunnel and lowering its bottom, to form a real cave with a very high vault. This is all ‘spiced’ by the charm that regularly distinguishes Etruscan places.

To conclude, the Formello tunnels provide an exceptional mixture by man and nature, for their size and their diversity, there are not any others with the same charm, in my opinion, in the province of Rome.